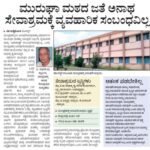 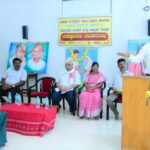 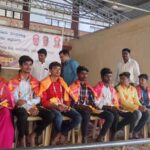 Sri Raghavendra Swamiji of Malladihalli ( Kannada: ಮಲ್ಲಾಡಿಹಳ್ಳಿ ಶ್ರೀ ರಾಘವೇಂದ್ರ ಸ್ವಾಮಿ ) (1890–1996), popularly known as “Malladihalli Swamiji”, was the founder of Anatha Sevashrama Trust, Malladihalli. He taught yoga to more than 4.5 million people all over the world keeping his base as Malladihalli in Chitradurga district, a tiny village in Karnataka, India, approximately 250 kilometers from Bangalore, India.

He was helped by rangappa and thimappa family for the construction of the ashram. He stayed in their house for 2 years before constructing the ashram under 2 acres of land donated by devanga community.

Malladihalli Raghavendra Swamiji was born in Barkur, Karnataka. This yoga and ayurveda teacher treated more than 3 million people for various diseases with ayurvedic medicines, and yoga without any surgery. He built an ayurvedic hospital at Malladihalli and Vishwa Yoga Mandir (World Yoga Trust) and various educational institutions, on a non-profit basis. His main concern was to educate the poor people and teach yoga to people from sections of the society for maintaining good health. He always said that “You should not exhibit yoga”, in other words, yoga is not for exhibition or competition purposes. Based on his 70 years of experience in teaching and practicing yoga and Ayurveda, the number of Yoga postures is equal to the number of animal and bird species in the world.

The State Government of Karnataka and the Central Government of India gave him several awards but he declined to accept them because his aim was not official recognition but the collection of funds for his various projects to help the poor and needy. He called himself “thiruka” (beggar) and urged people to donate freely to his projects. He was the author of books on yoga and ayurveda, as well as on Kannada literature, drama, music,etc., published under the pen name of Thiruka. Some of his writings have been included in school text books in Karnataka.

Raghavendra Swamiji was born in Barkur, a village located in coastal areas of Karnataka, to Anantha Padmanabha and mother Padmambal. He was their only child but was sickly, and barely conscious, till age fifteen. His parents named him Kumaraswamy. Later, urged by the head priest of Mantralaya Mutt, his name was changed to Raghavendra.

Many in the Kerala Hindu community are devotees of Sri Mookambika of Kollur. His parents decided to undertake a pilgrimage to Kollur to pray to the Goddess for the speedy recovery of their ailing son. The priest at the temple assured Padmambal that she need not worry about her ailing boy, who had every chance of becoming a famous person in the days to come. This prediction encouraged Padmambal, but after a few days of experiencing joy, she died. Later, Kumaraswamy was adopted by Puthali Bai and Narasimhaiah on the advice of Bhirthi Ramachandra Shastry. Anantha Padmanabha, leaving his son in the care of the foster parents went on a pilgrimage to Himalayas.

With God’s grace Raghavendra’s health gradually improved, and his foster parents began sending him to school. He performed well in every subject, except English. He was very fond of music, and learnt Carnatic music. He learned singing Bhajans and devotional songs. As a school boy he participated and acted in many plays, Yakshagana, and Thala Maddale.

When Kumaraswamy was in high school at Kundapur, the incident that brought about a metamorphosis in the boy’s life was the blessings of Nityananda Swamiji with Taraka Yoga (Shakthipatha Yoga). After this incident, Kumaraswamy’s life turned toward the spiritual, and he began meditating in nearby forests, on hillocks, and temples, aspiring to have a vision of God.

Siddharudha Swamiji was a famous saint, running several educational institutions and hostels for the poor in Hubli, Karnataka. Kumaraswamy told Swamiji that his mission was to have a vision of God, and the saint cautioned him that he was too young to accomplish this mission. After staying some days at Siddharudha Mutt he left for Tumkur, hoping to find some other teacher who would enable him to accomplish his mission.

Kumaraswamy started his association with K. Shivaram Karanth, when he met the well-known dramatist at the Amba Prasaditha Nataka Company, in Tumkur. Shivaram Karanth took Raghavendra to Ranganatha Thamankar, who offered him a job as a clerk at his drama company. He was entrusted with the sales of tickets and disbursement of salaries and wages to the staff of the drama company. Later during this period, he received yoga instruction from Sri Palani Swamy, a great practitioner of hatha yoga. Again, at this juncture he left his job, to accomplish his mission of seeing God and went barefoot from place to place. He was reminded of the words of caution by Siddharudha Swami — that he was too young to accomplish this mission.

Kumaraswamy decided to go see Swami Shivananda, a great seer, patriot, and orator. Swami Shivananda was known to inspire young minds with the burning desire to serve the country and people, irrespective of caste, creed, language and religion. Swami Shivananda exhorted his students to become physically and mentally strong by practicing Yoga. When Kumaraswamy told Shivananda Swami that his mission was to have a vision of God, he was told to first understand the pain of the hungry and the ailing, and that he should try to wipe the tears off those hungry and ailing. If you do so, you will find your true God, he was told.

Kumaraswamy was inspired by Shivananda Swami and he was later introduced to the Baroda professor Manekrao, who had taught Shivananda Swami physical exercises and the use of weapons, as a disciple. Manekrao (1878–1954) had acquired knowledge and virtues of power from his preceptor Jumma Dada, who lived up to the age of one hundred and thirty six years. Kumaraswamy learnt various martial arts, including Lathi, Katti, Wrestling, Mallakambh, Hatyaronka, rope climbing, and horse riding under the guidance of Manekrao. He also learnt the art of recognizing/solving problems without seeing the object, and curing the ailments of patients by listening to them, through the art of Shabdavedi.

Manekrao and Sri Shivanand Swami decided to send Raghavendra to Lahore to learn Ayurveda from Baba Lakshman Das, a versatile genius and an adept at both Yoga and Ayurveda, and a highly disciplined Ayurvedic practitioner. He was taught anatomy and metabolism on the basis of ancient scriptures written by Charaka, Sushruta, Vagbhata, Bhavamishra, Sharangadhara, Madhavacharya and so on. Baba’s instructions on science and medicine were drawn from classical sources, and he instructed his students through lectures and practical work. Kumaraswamy was taught about medicinal herbs and natural vegetation and preparation of medicines. As per the instructions of the Baba, Raghavendra had a chance to visit the hospital run by Germans at Lahore, where leprosy patients were served with care and love by German nurses and doctors. All these work experiences with Baba made Raghavendra strong, and his skills were fine-honed; this knowledge and experience were useful later when he administered ayurvedic medicines at Malladihalli.